What Matters – Using Tools to Free Ourselves and Follow our Vocation

It’s becoming increasingly apparent why I need to write about ways to live/work anywhere.

I was shocked.  This girl is tough. Everyone is intimidated but respectful of her. To see her break down, I actually asked her if she was kidding, to which – of course, she said ‘no’. There are so many people that have fallen prey to a system that doesn’t work anymore. Or to a system that is fake with so many ‘rules’. But all the rules were invented, they are part of a game.   We allow others to take control of our strings like a puppet.

Everybody was meant to be free, to live life the way they intended – not sitting in front of a TV but going out and experiencing our passion, unleashing our creativity, and following our vocation.  Instead of taking control of our lives, we allow systems to manage our life for us.  The world is becoming increasingly borderless and there are tools that we can use to build the life we want, including especially not being limited to a particular job or location.

As this blog continues I hope to provide more tools and tips on how we can live and work anywhere we choose.  Follow me also at libtuck.com and twitter.com/libtuck (@libtuck).

No me sale. No puedo dejar de pensar en ello

A break from the exhaust and hustle and bustle of the city, I took the weekend and headed to the long-awaited Patagonia.

One of best parts may likely have been the Omnibus, or the double decker, extremely comfortable reclining seats.  20 hours flew by … except for the lack of videos – the driver had a Luis Miguel´s Best special and we got to listen to a local famous singer.  We weren´t the only ones wishing it would stop, and we did convince the bus attendee, with a few laughs, to turn down the volume at the very least.

They served alfajores (dulce de leche snack with chocolate, like the Little Debbies of Argentina) and medialunas (croissants), some cafe, and some milanesa with papas.  Not bad for the bus.  The way back they shared vino and whiskey – a much smoother ride.

Bariloche, later I discovered to be ´the most important tourist city of Argentina´was just that – touristy – but also beautiful.  Nestled in the Andes mountains near the border of Chile, this skiing town on a huge lake was a great site after the long bus ride.

I was ill prepared for the city, as the mountains with their still-snowy peaks weren´t as inviting as I thought.  The warmest gear I had was a pair of jeans.  I had to buy a sweatshirt to fight the cold winds.

Everyone said to get out of Bariloche so I followed their advice, rented the last car (talked the rental company to let us drive a dirty one and with a discount) and headed to the circuito chico and circuito grande – the small and big loops.

Both gorgeous, as you can see from the photos here that I just added, the first loop was more touristy.  Stopped only for some great photos and a short hike up the side of the smallest of three mountain peaks (again, no gear with me limited my trip and it was expensive to rent, let alone finding an open store over the holiday).

Next was the big loop.  The rental car agency was off on their estimation by about 60 km (you rent a per km price) and never mentioned that 1/2 of the way was a gravel road.  But nonetheless, an adventure.

Patagonia – and in Nahuel Huapi National Park, where the big loop was – it reminded me of a mixture of the gorgeous Pacific Northwest with snow capped forested mountains and fresh mountain water streams, mixed with a little bit of the BWCA (Boundary Waters / great lakes) with fresh water lakes and trout fishing, a little of the Irish sea due to the deep blue green and blue colors in the water, a little bit of Neuschwanstein Germany with the castles (in this case a hotel) seated high in the mountains overlooking little lakes and islands, and Utah just east of the Andes with deep dry valleys and large unique rock formations.

I saw a sign that said ‘don’t be like cats, wrap your feces’.  Ok….  will do.  Now, it was getting dark and I checked out a campsite but you had to pay to use the toilets and showers, but hey there was a place just down the road that was open camping and free, but no showers.  Really?  Awesome, thanks, I’ll take that.

Though once again unprepared for the cold, and now some rain, it was like pulling up to a private beach in the middle of the mountains… not just any mountains – Patagonia!

It was the most amazing place to stop, have a sandwich, play on the beach until the sun set (later in the West, 9:45 vs. 8 in Bs As), then putting every warm piece of clothing I could find to cuddle in and off to bed.  Only had to turn the car and heat on twice throughout the night before waking to the most gorgeous view ever.  I had turned the car around so I could see the view, I would have had to pinch myself to believe it otherwise.

The next day was off to finish the big loop.  One of the most unexpected and beautiful views came from out of nowhere, just after deciding I was incredibly sick of gravel roads and was ready to return the car.  Right up there with the Cliffs of Moher was Villa Traful. 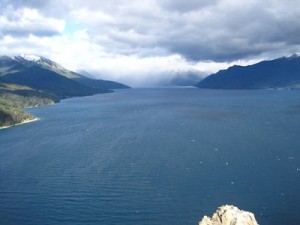 A near 360 degree view of mountains, lakes, and wind like I’ve rarely felt (throw a rock and it boomerangs back), a steep dropoff that warns you not to trust your luck, beautiful blue waters, white capped waves, some snow still glistening on the mountains.  I wanted to breathe every inch of the view.

In the actual town, well, a dirt road and a couple of buildings, and some cattle and horses meandering aimlessly, happy and plump, was Villa Traful.  I stopped at the town’s only gas station, and only one for a while I’m sure, I had to drive around a cow feeding her calf.  It was incredible.  No wonder why the beef in Argentina is considered the best in the world, the cows are just happy and chill.

Long story short, after the great car camping, private beach, and tourist loops, it was back on the bus and back to Bs As for New Year’s.  If I’d had more gear and more money to spend I would have continued south to the End of the Earth, Ushuaia, but with holiday season, it was very expensive – and cold, and far far away.  Someday I’ll need to come back and spend at least a month in Patagonia.